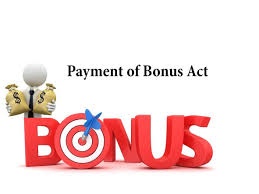 Government approved amendments to the Bonus Act, 1965 raising the limit for calculations of bonuses. More so, it has also made this act applicable from April 1st, 2014. This implies a “retrospective effect”, which is an added liability for employers. Establishments will now have to pay the unpaid bonus for the previous 2 financial years as well.The amendments have been made with the intention to bring more employees under the eligibility of the Bonus Act.  While this will certainly be cheered by employees, this also creates a financial liability for employers.

Certain States like Maharashtra has made this Act applicable to all the Establishments employing minimum 10 employees.

Exemption for newly set up Establishments

Newly set up establishment is exempted from paying bonus for the initial 5 years, provided no profit is made during these years. If the employer derives profit in any of the first five years, he has to pay bonus for that year.

We came up with 9 questions that would clear all doubts and help you tackle the increase in statutory bonuses head on.  Here are the answers to all the questions that you may have:

A bonus is an additional payment given to employees with the intention to motivate them.  The Statutory Bonus came into existence with the approval of the Payment of Bonus Act in 1965 by the Government.  According to this act, certain establishments had to pay an amount to their employees based on their profitability each year.  This amount was to be over and above their basic salaries.

The purpose of the act was to enable employees to partake in the profits of their respective companies.   The bonus, when applicable, also gives employees an opportunity to earn more than the minimum wages.

2. What has changed with the payment of the Bonus Act?

The government has approved amendments that have not only increased the amount paid out but also the number of people who are eligible. Here are the recent changes to the act:

Earlier this act only covered employees that were earning up to Rs. 10,000 per month and lower.  However, the amendment has raised this ceiling to Rs. 21,000.  This has been done with the intention of bringing more employees under the eligibility of the Bonus Act. This also means that employers will have to pay employees that fall between the Rs. 10,000 and Rs. 21,000 the pending Bonus amounts since April 1, 2014.

Earlier, the maximum statutory bonus that could be paid out was 20% of Rs. 3500.  However, this has been changed to 20% of Rs. 7,000 (or minimum wages, whichever is higher).  This gives companies a chance to allot a greater portion of employees’ CTCs towards bonuses.

Before the amendment, the minimum that could be paid to employee under the bonus act was Rs. 292 (8.33% of 3,500).  However, this amount has been doubled to become Rs. 583(or 8.33% of the minimum wages, whichever is higher).Since, companies are expected to pay all arrears since 2014,this particular change seems to be causing the highest discomfort for employers.  In states where the minimum wage is higher than Rs 7,000, the statutory arrears liability becomes even higher.

3.   Who is the Bonus Act applicable to?

The Bonus Act 1965, is only applicable when all of the following conditions are met:

·         Financial loss to the Employer to the extent that bonus can be deducted for that year.On dismissal of an employee for

·         Riotous or violent behaviour while on the premises of the establishment; or

·    Theft,misappropriation or sabotage of any property of the establishment or Misconduct of causing

Yes, employees that have left the organization are still eligible for their arrears.  Employers will have to pay the outstanding bonus of past employees as well.

7.   How do I calculate my liability as an employer?

Your liability depends on a number of factors like:

For breach of provisions of the Act, the employer shall be punishable with imprisonment upto 6 months and/or fine not exceeding Rs.1,000.

9.   What is the current status of the Amendment Act?